Why do some Lean Six Sigma Deployments Crash & Burn? 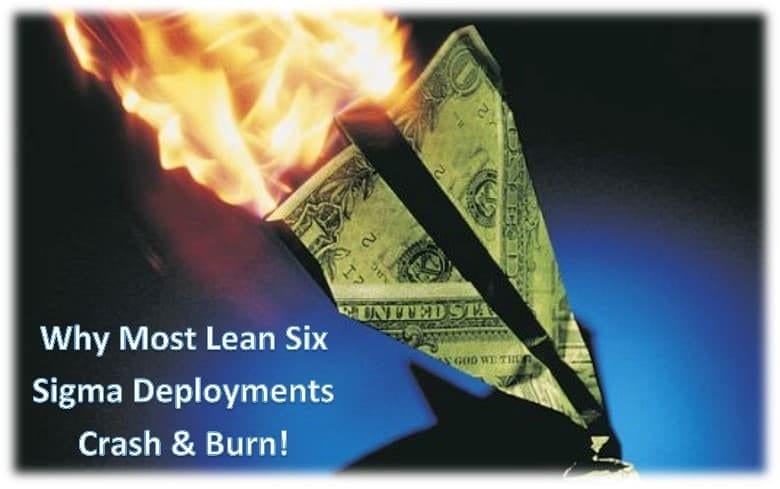 When I was 18, I bought a 1967 Ford Mustang with a 302 Motor. The motor needed to be rebuilt which was an expensive problem for an 18-year-old. I thought to myself “how hard can it be? It’s just metal parts and gaskets.” I decided that I could rebuild the engine on my own. I’m sure you can imagine how this turned out. After many failed attempts and a lot of money wasted, I took it to an expert to have it rebuilt correctly.

This is what happens when you have no clue how to rebuild an engine, but you try anyway. You will most likely “Crash and Burn!”

Does this mean that you need an external consulting firm to guide you? You would expect me to say “YES” because deployments are one of our core services. The answer is “NO” … you don’t need an external consulting firm to deploy Lean Six Sigma. What you do need is education on 1.) How Not to do it! And 2.) How to do it correctly. I will, however, add a disclaimer; even the best instructions cannot replace experience. If you were having open-heart surgery, would you want a surgeon who has only read a book on performing open-heart surgery, or the surgeon with years of experience performing successful open-heart surgeries?

Now, let’s talk about how NOT to do it…

Below are five (5) reasons why Lean Six SigmaSix Sigma Definition: Six Sigma is a set of techniques and t... Learn More... Deployments fail:

Our Executives are “Too Busy” for training

“Our executives are too busy for training… They support the effort, so do they really need it?”

I can’t tell you how many times I have heard this when discussing a LeanLEAN Definition LEAN is a production method aimed primarily ... Learn More... Six SigmaSix Sigma Definition: Six Sigma is a set of techniques and t... Learn More... deployment proposal. This is the first clue that the company’s efforts will most likely fail.

My team has one key metric to gauge the success of a deployment and that metric is the engagement of the Company Leaders. The more the leaders are engaged, supportive and accountable the better the chance of a sustainable deployment.

Read more about what happens to a deployment when the “Executives don’t buy into the Lean Six Sigma Deployment” in the following article: “Our Executives are Too Busy for an “Executive Training” (https://sixsigmadsi.com/lean-six-sigma-executive-training/).

Leadership wants to train a single Belt to be the “CI person” (and single-handedly save the world!)

We teach several public Green Belt and Black Belt courses every week throughout the globe. One question that we ask our students at the beginning of each class is: “How many of you were sent to this class and are expected to go back to your company and ‘save the world?’”

What I mean by this question is: how many of our students are expected to learn the tools and methodology of a Lean Six Sigma Green Belt and then go back to their company and single-handedly improve processes. It amazes me that nine out of ten students raise their hands.

Expecting the Belt to single-handedly address and solve the company’s problems is like dressing them in wooden armor with a wooden sword and shield and then sending them out to fight the fire breathing dragon. It’s a suicide mission. This is another key reason why Lean Six Sigma Deployments Fail!

Read about three signs that leadership has fallen into this trap at “Can You Train a Green Belt to (Single-Handedly) Save the World?”

The belt needs to have an infrastructure (or foundation) in place to create sustainable change in an organization. To read more about creating the correct infrastructure read our article: “How to Build the Foundation for Lean Six Sigma Deployment”

Expecting the New Green / Black Belt to Deploy Lean Six Sigma in your Organization is like Expecting the Plumber to Build your House. Your plumber is an expert at plumbing, which is an important part of the house but there is much more than plumbing involved when constructing a house.

Read more about what happens when you expect the Belt (who has little to no hands-on experience) to deploy Lean Six Sigma in an organization.

Expecting the Belt to be a “Company Problem Solver”

One of the worst ways a company can fail in their Continuous Improvement Efforts is to promote the Myth that “CI’s role is to Improve Processes.”

It baffles me that some companies expect their Belts to be the “Company Problem Solver”. They are expected to find (or be assigned) and resolve process problems.

This is not a sustainable way to improve a company because you have broken the 1st rule of change managementCompanies use a change management plan in a variety of proce...; “the processThere are many ways to organize your lean six sigma processe... Learn More... owner (SME) shall improve their own process!”.

The Belt’s job is not to be the “Sage on the Stage” (the problem solver). Their job is to be the “Guide on the Side” (using tools to help the SME’s find the real solution). It is an amazing transformation when the SME’s see the “fix” to the process in the data (swim lane maps, VSM’s, Spaghetti Diagrams, Hypothesis Tests, etc.). When the SMEs are involved in identifying and implementing the fix then the SMEs will take ownership of the new process.

From my experience, this is one of the main reasons why Lean Six Sigma Deployments Fail!

Read more about the signs that your organization has fallen into this trap in our article “It is a Myth that CI’s Role is to Improve Processes!”

This is one of the quickest paths to failure of a Lean Six Sigma Deployment certification. Here is a scenario that I have seen in many different companies: An employee from the organization is sent to a Green Belt course to learn Lean Six Sigma. When they return, the word gets around that the company has a new “problem solver.” The Green Belt quickly gets assigned random projects that are 1.)  reactions to “pains” that we are experiencing presently, or 2.) Leadership agenda. Leadership has no training on how to effectively identify Lean Six Sigma projects. The company’s idea of a project ranges from moving equipment; project managing a facility expansion; to implementing a new ERP/MRP system. None of these are Lean Six Sigma DMAIC opportunities.

Because the organization has not built the Foundation for a Lean Six Sigma Deployment certification, they will send the Green Belt on “wild goose chases” that will have no sustainable effect on the profit on the company.

To learn more about the infrastructure that must be in place to create a sustainable Continuous Improvement Effort read: https://sixsigmadsi.com/how-to-build-the-infrastructure-for-lean-and-six-sigma/

Tell us your story!

Are you or have you been a part of a company where their Lean Six Sigma efforts crashed and burned? Were any one or more of the 5 reasons from this article the culprit? Tell us your story in the comments below…