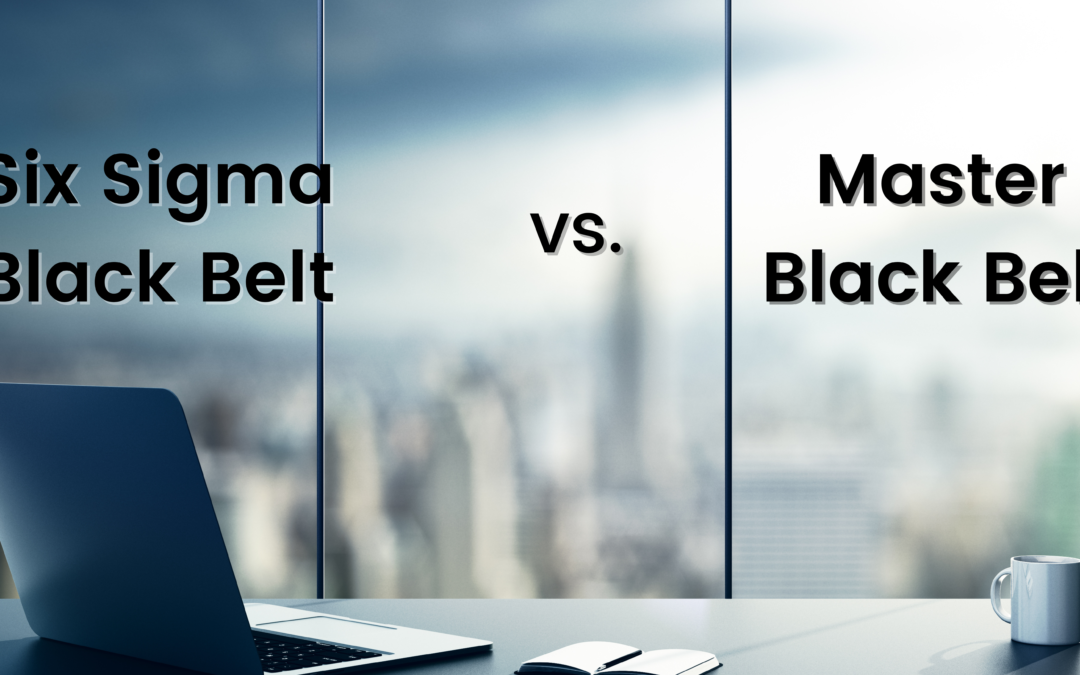 Six Sigma belt classification is based on martial arts rankings. Each color indicates the levelStatistics level A statistics level is the value of input in... of Six Sigma knowledge, tactics, tools and methods. These are the three initial belt levels.

White: Individuals learn the basics of white terminology and most common procedures.

Green: Individuals experience significant growth as they gain more experience and learn how key roles are played in Six Sigma projects under the guidance of a Six Sigma blackbelt leader.

Black Belt and Master Black Belt are the final two levels of belt. Both designations signify mastery in Lean Six Sigma. However, there are significant differences between them.

What is the Six Sigma Black Belt and what does it mean?

Six Sigma is a method that reduces waste. The principal goal of the Lean method is to minimize wastage. Lean Six Sigma (LSS), a discipline that combines both of these methodologies, is Lean Six Sigma. Lean analysis identifies eight wastesMuda (無駄, on'yomi reading) is a&nbsp... Learn More... and recommends improvements to manufacturing operations that can be used to manage and minimize waste. By paying attention to the impact of waste on manufacturing processes, business executives can optimize their operations and make substantial progress in optimizing them.

Black belt candidates learn how to bring about meaningful change within an organization. Participants can participate in improvement projects as part of the certification program. This gives them the management experience they need to manage their own businesses and help supervise lower-level belts.

To improve your skills and use your knowledge efficiently to help businesses and organizations in their organizational processes, you can get your Lean 6 SigmaSix Sigma Definition: Six Sigma is a set of techniques and t... Learn More... Black Belt certification

The Duties of a Six Sigma Black Belt

Black belts are responsible for implementing and completing the projects and plans they have been given. They interact with different groups and train others to become team leaders. Black belts must have exceptional leadership skills and experience in psychology and human behavior.

Black belts are also able to act as consultants within an organization, supporting multiple departments at once. They can also help with problem-solving or statistical lectures. Green beltThe Six Sigma Green Belt is a certificate that professionals... Learn More... and black belt master black belts mentor applicants. Black belts must have exceptional communication skills to lead their teams. They will be able to teach Six Sigma and create teams that deliver exceptional results. The green belts will be there to assist the black belts when they aren’t leading their teams.

What is the Six Sigma Master Black Belt and what does it mean?

Master black belts are responsible for formulating and delivering an organization’s Six Sigma plan. The ultimate goal of Six Sigma is to improve output and reduce costs. They work with the company’s leaders and other stakeholders in order to establish clear objectives and then guide the Six Sigma team towards achieving them. The master black belt is the one who paves the way to others in the Six Sigma group.

Master black belt tasks are often complex and detailed. Each step must be completed correctly in order to allow for errorStatistics error The dual dimension of error statistics is p.... They are responsible for creating and implementing programs that can be used by the rest of their team. They should also be available to help black belts in any way they need. The master black belt’s job is to establish a solid management system.

Below are the key differences between black belt and master black belt.

The Six Sigma Master Black Belt in definition coaches and trains the black and green belts. They are at the Six Sigma program’s level. They are responsible for leading the organization’s problem-solving efforts. They coach and train the team members below them.