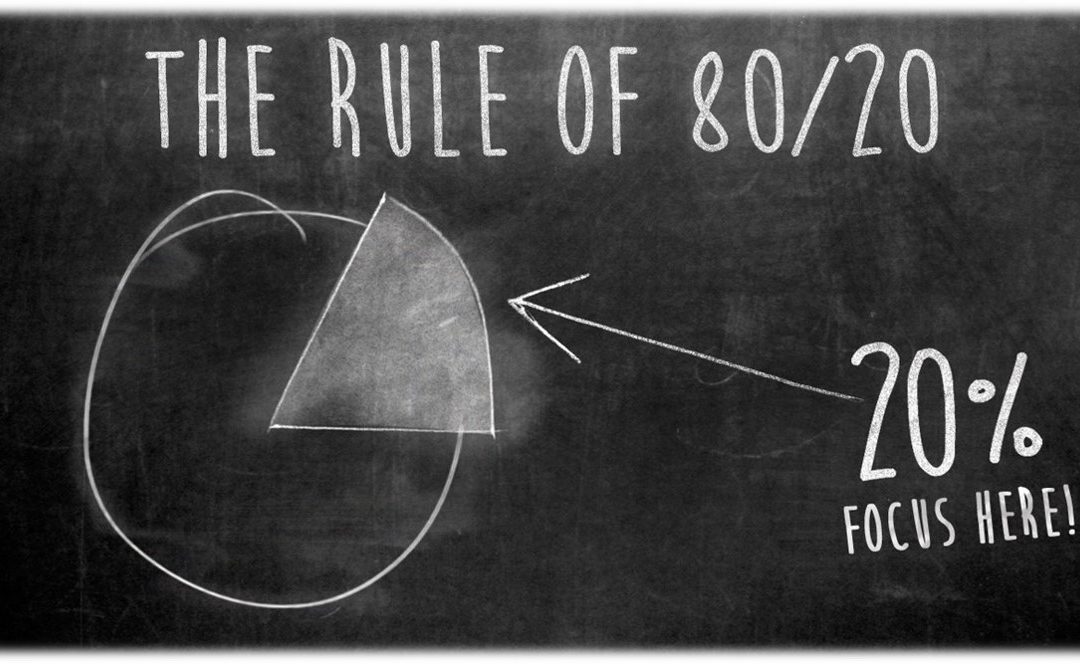 What is the Pareto principle (or 80/20 principle)?

The Pareto Principle (or 80/20 principle) is an important theory that states that 80 percent of events are caused by 20 percent of their causes.  This means that a small number of causes can have a significant impact. This concept is crucial to grasp because it will help you prioritize the initiatives that have the greatest impact.

Richard Koch, a leading thinker in the Pareto Principle and its application to business management, shows in his book The 80/20 Principle how you can achieve more with less in business.

Origin of the Pareto principle (or 80/20 principle)

Vilfredo Pareto, an Italian economist, developed the Pareto principle in 1896. Pareto noticed that only 20% of Italy’s land was owned by the poor. Pareto also observed this in his garden: 20% of his plants were producing 80% of the fruit. This relationship can be mathematically described as a power-law distributionUsed for determining the confidence interval for means or fo... between two quantities. A change in one quantity causes a relevant change in the other.

The 80/20 rule does not represent a mathematical formula but is more of a generalized phenomenon that can also be applied to business, economics, and time management.

Examples of the Pareto principle in general:

The Pareto principle (or 80/20 principle) and Lean Six Sigma

It all started with Joseph Juran, who introduced quality control in the 1950s. Juran used the 80-20 Principle to identify the most serious and frequent causes of inferior quality. His clients, who were mostly Japanese, advised him to fix them first. They did. They rose from a devastated nation with no exports to become a stronghold in the 1980s.

Progress is about energy. Tiny amounts of energy can go a long way. The Pareto Principle tells us where the most bang for our buck is.

The 80/20 Principle is a scientific law that has been proven to be effective in both business and economics. It states that most results are due to a small number of causes or efforts. This is how it fitsFitted values can also be known as fits. The fitted val... within the Lean Six SigmaSix Sigma Definition: Six Sigma is a set of techniques and t... Learn More... framework. The 80-20 Principle is not a law, but an observation. Although it is not always true, the 80-20 and 99-1 distributions are often the most profitable. This is where you can make a lot of money with little effort.

The 80/20 rule is applicable to every industry. However, the Pareto principle can be used in economics and business. The 80/20 rule helps you to determine where your efforts can be directed to maximize your output. These are just a few examples of where you can use the tool.

The 80/20 rule can be used to prioritize tasks you need to complete during the day.

This is done by listing all the tasks that must be completed that day. Next, identify the most important tasks. Are there any tasks that require you to collaborate with others? Do you have any projects that are stalled because of the tasks you have? Although these tasks are simple to complete, they can have a significant impact on the flow of the project.

Identify the problems your team is facing. This is the problem you are trying to solve in this decision-making process.

Identify the root causes of your problems. Use a tool such as the 5 WhysThe 5 Whys Technique: Origins The 5 Whys steps method was de... process to find the cause of all the problems you are trying to solve.

Your problems can be grouped into related categories. You can group the causes of your problems together if they fall under the same categories. This will help you determine if one solution is sufficient to solve multiple problems.

Give each problem a value based on its impact on the business. You can use a number between 1 and 10 or a monetary value to indicate their importance.

Create a plan that focuses on the top 20% of problems that have the greatest impact on your business. One solution can solve multiple problems. Calculate which problems are in the top 20 percent based on the assigned values to each problem. After identifying the problem, create a plan that will solve it using problem-solving strategies.

The Pareto Principle (or 80/20 principle) has many advantages

The Pareto Principle can be applied in practical ways. It can help you see who to reward and what to fix. If 20% of the car’s design flaws cause 80% of crashes, then you can identify those flaws and fix them. If 20% of your customers drive 80% of your sales, you might want to reward those customers for their loyalty. The Pareto Principle can be used to guide how resources are allocated.

Pareto’s observation is correct, but the 80/20 split does not necessarily mean it is always true. 30% of the workforce, or 30 of 100 workers, may not complete 60% of the output. Others may be less productive or just slacking off. The Pareto Principle is an observation, not a law.

What can cause a Six SigmaSix Sigma Definition: Six Sigma is a set of techniques and t... Learn More... Project to Have a Slow Agonizing Death? Not have a manageable scope!

Only about 35% of Six Sigma Projects are completed (and this is a conservative number).

Why? Because no one has educated the belt that it is improbable they will solve world hunger. This eventually leads to a permanently stalled project.

We teach our students that three of the most important words when it comes to LeanLEAN Definition LEAN is a production method aimed primarily ... Learn More... Six Sigma Project Scope are: focus, focus and focus!

You can’t solve world hunger, but you have a greater likelihood of success if you focus on one small village. This is where the Pareto Principal of 80/20 comes into play, if you focus on the 20% of your processes that are causing 80% of your problems, you will have a manageable scope for your project, and if successful, will yield the most meaningful results.

Once you Improve, Optimize and Control hunger in that small village then you can translate the improvements to the next village in our priority with subsequent “multi-generational projects”.

With each generation of projects to solve world hunger, each village gets easier. We can even expand our scope to improving several villages at once as we have encountered most of the variables in previous projects.

I’m guessing the question that is burning in your mind is “do I have to solve world hunger before I complete my project?”

The answer is “No”. Each generation of projects are considered their own project.

The best tool for understanding the optimal Scope for a Project is the Pareto Chart.

To use the example Pareto Chart, we must first have data.

In this scenario, the belt has been given the task to reduce missed deliveries in the domestic U.S.

As Lean Six Sigma practitioners, we know that focusing on the larger problem will decrease our chance of success. We need to scope down to a project that we can manage.

Below is the data for the example pareto chart

We need to see the data in a Graphical format, so now we produce the Pareto Chart.

Fill in the Pareto Chart as seen in the picture below:

This will produce the following “Pareto Chart of City”:

The Pareto Chart shows you that Atlanta and Chicago are where 47.1% of Missed Shipments occur, yet they are only two out of the eleven cities.

This chart can help us reduce our scope to one or both cities.

We can then use further Pareto Charts to scope down on Counties or Districts within the Cities.